The 89ft (27m) Russa Taing broke down to the west of Westray, Orkney, and repeated attempts by two vessels to secure a tow failed. The Coastguard Emergency Towing Vessel (ETV) crew then took over the rescue and managed to fix a line on the Kirkwall-registered fishing boat and tow the seven-strong crew to safety. Severe weather hampered the operation and the boats arrived in Kirkwall shortly after 7am on Friday, around 13 hours after the alarm was raised. 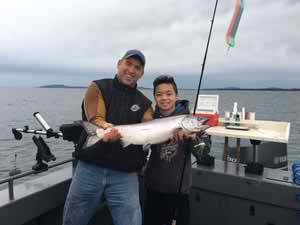 A Coastguard spokesman said: “The vessel broke down and requested assistance because they were drifting and the weather was bad. “Another fishing vessel, the Kila, attempted to tow it but they were unsuccessful because the towing cable kept breaking.

To read the entire article, please click on this link http://www.scotsman.com/news/emergency-tow-rescues-fishing-vessel-off-orkney-1-4245090