In Tanzania, a Horrific Fishing Tactic Destroys All Sea Life

Strewn in the shallows of the Indian Ocean off Tanzania lie shards of dead coral reefs.

Why? Because poor Tanzanian fishermen are using explosives, illegally, to kill hundreds of fish in seconds. Blast fishing, as it’s called, not only destroys large numbers of fish directly—but indirectly as well by killing coral and the rich array of marine animals that depend on it. 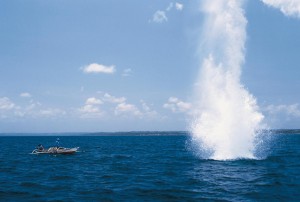 Experts believe that in Tanzania, blast fishing is occurring at unprecedented rates, in part because a boom in mining and construction has made it easier for people to get their hands on dynamite. Bottle bombs made with kerosene and fertilizer are also used. “It’s pretty obvious it’s on the rise again,” says Tim Davenport, country director of the Washington, D.C.-based Wildlife Conservation Society’s (WCS) Tanzania program.

To read the entire article, please click on this link http://news.nationalgeographic.com/2015/12/151230-Tanzania-blast-fishing-dynamite-coral-reefs/