Fish don’t see race,” Ishama Monroe said on a recent morning as he flicked his rod from the front of the bass boat. Monroe, who is 44 and goes by “Ish,” had launched at dawn from the ramps on the outskirts of Orange, Texas, for the last of three practice days ahead of the 2018 Bass Pro Shops Bassmaster Elite at Sabine River Presented by Econo Lodge. It’s a mouthful of a name for a sporting event, but sponsorships are the bread and butter of the world’s most prestigious fishing tour. Monroe was one of two African-Americans in the 108-person field, and he’s the only black man who’s been a fixture at the top echelon of the sport for more than a decade. But he doesn’t make a big deal about the sport’s demographics. 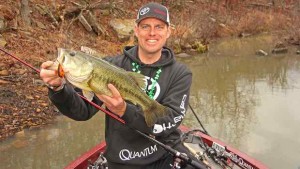 Monroe, stocky and just shy of 6 feet tall, was wearing a long-sleeved polyester shirt, athletic shorts and flip-flops on this sweltering June day. He was working a pedal on the bow that controlled his trolling motor, allowing him to glide along the shore of a small tributary off the main river. He aimed his lured hook with precision toward the shallow, murky waters that bass are known to prefer. Just moments ago, he had reeled in his first bass of the day, a two-pounder, which he quickly released back into the water. On the three practice days preceding the tournament in southeastern Texas, Monroe was visiting spots that proved fruitful in previous years and exploring a few new fishing holes. “But I’ve already got my game plan for tomorrow,” he said.

To read the entire article, please click on https://theundefeated.com/features/ish-monroe-has-found-his-perch-in-the-heavily-white-world-of-bass-fishing/