For the second time in three years, local correctional officers have come to the rescue of the annual children’s fishing derby. In 2013 they stepped in with financial assistance when the future of the event, run for the past 16 years by the Kingston and District Fish and Game Club, was in jeopardy after the Ministry of Natural Resources cancelled the grant they gave each year. 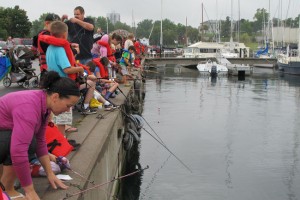 And now, after club executive members Jim Muir and Doug Huddle announced Friday they could no longer manage the workload that comes with hosting the derby, correctional officers have stepped in again with one of their own organizing the popular event. The suggestion for guards to take on the derby couldn’t have come from any higher a source, said Mike Deslauriers, the officer who, as president of the guards’ union local in 2013, had spearheaded their involvement back then.

To read the entire article, please click on this link http://www.thewhig.com/2016/03/07/kingston-kids-fishing-derby-saved-again