Just after dawn on Sunday, March 14th a field of 247 competitive tournament anglers launched on Lake Murray, just outside of the city of Columbia. The weather was stable and the wind calm. Water temperatures warmed to 60 degrees for the first time in the year. Throughout the day, an ideal scenario unfolded for Spring bass fishing on South Carolina’s renowned Murray, as Strike King launched its 2nd Big Bass Challenge of 2021. 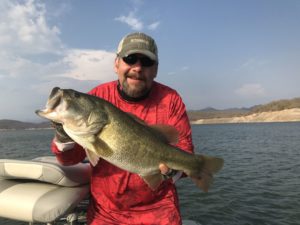 Throughout four weigh periods of the tournament, anglers brought a number of four- and five-pound class largemouth to the scales. While a scattered few anglers fished deeper water near spawning grounds, the majority of the big fish were caught shallow. Alex Cooke won the day with a 5.97 lb. bass, caught on a Junebug colored finesse worm. It was a close finish, with Alex besting Austin Davis by just 0.03 lbs. Alex took home the grand prize of a “Total Boat Makeover Package” worth $5000 in Strike King and Lew’s product. Second, third, and fourth place finishers also took home coolers from Mammoth Coolers. Each period winner was awarded $1,500, with a total of $3,750 paid out each of the two-hour periods.

To read the entire article, please click on https://www.wired2fish.com/news/lake-murray-shows-off-for-strike-king-big-bass-challenge/