Three men have been charged under new laws crafted to prevent the illegal sale and harvest of Atlantic striped bass in local waters, the state Department of Environmental Management announced on Friday. Authorities said Chad W. Braga, 31, of Swansea, MA, Brandon DeFaria, 34, of Rehoboth, MA and Michael A. Saviano, 35, of Warren, RI, were arrested for fin clipping violations and found to be in possession of bass that had not been clipped. 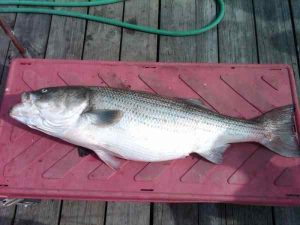 The regulations require recreational fishers to clip the right pectoral fin of striped bass 34 inches or larger when caught. Fish dealers cannot trade in fish without the fin. The idea is to prevent fish caught recreationally being sold in the commercial market to bypass catch limits and fishery restrictions. The DEM said that Braga and DeFaria were found with six striped bass meeting the clipping requirement that were not clipped. They were fishing recreationally out of Galillee in Narragansett and will appear for arraignment in Fourth Division District Court on July 27.

To read the entire article, please click on this link http://patch.com/rhode-island/narragansett/ma-fishermen-arrested-illegal-striped-bass-fishing-ri-waters