Mainers to start fishing for baby eels later this month

One of the most lucrative industries in the state of Maine is scheduled to get started for the season later this week when fishermen start seeking baby eels. The eels, called elvers, are valuable because they’re used as seed stock by Asian aquaculture companies. Maine fishermen sold them for more than $2,000 per pound last year, and they have fetched more than $2,300 per pound in the past. 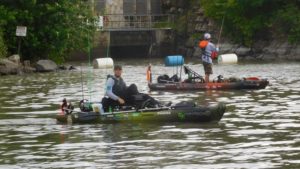 The elver season is heavily regulated and runs from March 22 to June 7. The state awarded the right to apply for an elver license to nine residents this year after more than 3,600 people applied for the licenses. Those residents will be able to join hundreds of others in the fishery. Aquaculture companies raise the elvers to maturity so they can be used as food. Some of the eels return to the United States to be served in sushi restaurants.

To read the entire article, please click on https://www.pressherald.com/2020/03/16/mainers-to-start-fishing-for-baby-eels-later-this-month/