Monster Largemouth Bass Caught At Lake Of The Ozarks 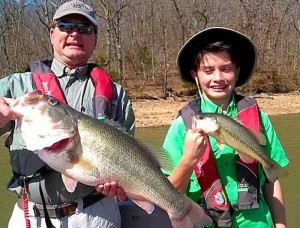 “At first, Val thought he had snagged a carp because it was so big and fighting so hard,” said Uxa. “But I looked back and saw a giant bass boil and knew he did not have a carp, but a huge bass on the line. I immediately grabbed my net and we landed the monster first try. I knew it had to be at least 10 pounds, but I didn’t have my scale with me and had to call a friend to bring his so we could get an actual measurement. That bass officially weighed in at 10.11 pounds.”
To read the entire article, please click on this link http://lakeexpo.com/news/lake_news/monster-largemouth-bass-caught-at-lake-of-the-ozarks/article_b197db4c-f106-11e5-83d4-8b5fb7f698c2.html
Posted in:Uncategorized
Tags:Tags: Largemouth Bass