A “two-headed lake trout” may sound like a mythical marine animal, but apparently the creature is real, and can be found in New York. A woman fishing on Lake Champlain on the New York-Vermont border reeled in a trout with two mouths last week. The fish was caught by Debbie Geddes. Knotty Boys Fishing, a local competitive fishing team, shared a photo of the bizarre fish on Facebook, both horrifying and mystifying social media users. 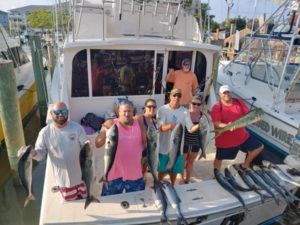 “Two headed Lake Trout caught by a co-worker Debbie Geddes a few days ago on Lake Champlain,” a Knotty Boys team member, who works with Geddes, wrote on Facebook. Some commenters shared their own photos of two-mouthed fishes — apparently they are not unheard of. While some people claimed they’ve seen two-headed fish before, others thought the fish in the photo did not have two mouths and looked deformed from an injury.

To read the entire article, please click on https://www.cbsnews.com/news/two-mouth-fish-in-lake-champlain-new-york-woman-catches-fish-with-two-mouths-claims-its-a-two-headed-trout/