A funny thing happened on the way to the scales for Nicholls State University’s bass fishing team of Tyler Rivet and Cameron Naquin. The duo was competing at the 2017 Carhartt Bassmaster College Series National Championships in the Bemidji Chain of Lakes in Paul Bunyan Park on Aug. 10-12 in Bemidji, Minn. The tandem qualified for the event in a regional tournament held in January, and after the first day of the national championship, they were on the cusp of breaking into the Top 12. 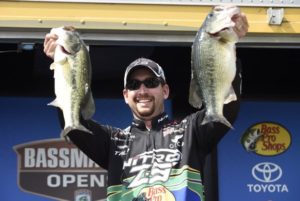 A Top 12 finished would’ve given the team a chance to compete on Sunday and try to earn a spot in the College Classic, which is made up of the Top 4 teams in the national championship. But when Rivet and Naquin reached the scales, one of the fish they weighed was under the 12-inch limit and the duo was penalized. Not only were they not allowed to use the fish, but suffered a one-pound penalty.

To read the entire article, please click on this link  http://www.dailycomet.com/sports/20170816/nicholls-bass-fishing-team-competes-at-national-tournament