He had been close the past two years, including a frustrating second place finish in 2018. Nick Salvucci had said that he wanted to win the U.S. Open more than anything – now he can claim that title as his own. 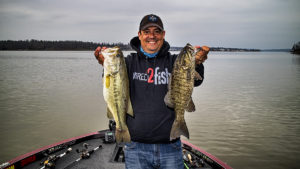 After taking over the lead on day two, Paso Robles, Calif. pro Salvucci did enough on the final day to close out the victory, despite coming in to the Calville Bay sales one fish short of his daily limit. He did enough the first two days in posting consecutive 11-pound limits, and his more than two and a half pound lead allowed for a margin of error seldom seen in a U.S. Open on Lake Mead. He arrived as the final angler to present his fish to the scales, and when the screen hit 9.44 pounds, he had what he needed and more.

To read the entire article, please click on https://www.wired2fish.com/news/nick-salvucci-wins-2019-us-open-bass-fishing-event/