One piece of fried chicken was my limit while trolling for trout at Rock Lake south of Cheney last week. I was interrupted numerous times by impatient fish, and the guffaws of my three partners, as I attempted to eat a single breast piece from the Col. Sanders bucket. 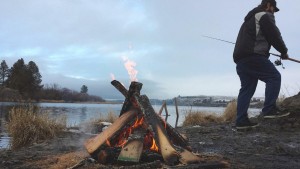 Each time I’d reel out the monofilament line and pick up my lunch, a fish would hit the lure before I could finish chewing a bite. Nearly any fly, spinner or plug we tried caught fish. Sometimes the 13- to 15-inch fish would hit before I could get 60 feet of line off the reel. “A guy could starve while fishing out here,” I complained. Luckily, the daily limit is five trout. I was done fishing in less than half an hour of trolling from the launch area even though I lost a few trout at the boat and released several smaller fish.

To read the entire article, please click on this link http://www.spokesman.com/stories/2016/jan/16/rock-lake-fishing-benefits-from-lawsuit-filed-two-/