Is the queen of Oregon rivers shedding gems from her crown? Or just trading diamonds for rhinestones? The largemouth bass John Vahey of Oregon City landed Aug. 1 in the Deschutes River, 12 miles above its mouth at the Columbia River, ultimately didn’t concern him that much; nor did the fact it struck in stout current he’d been told to cast into for steelhead. 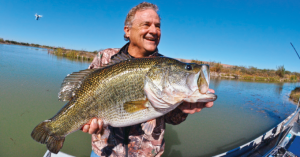 What concerned him far more were the seven smallmouth bass he also caught in just 20 casts that day – targeting them with a Roostertail spinner in scattered holes up and down the lower river. In fact, he and friends on their annual trip upriver with guide Forrest Foxworthy of Oregon City caught more smallmouth than steelhead, an uncomfortably common observation for several of the river’s most seasoned guides and anglers in the first weeks of the 2016 summer steelhead season.

To read the entire article, please click on this link http://www.columbian.com/news/2016/sep/29/smallmouth-bass-invading-lower-deschutes-river/