A teenager deep-sea fishing off the coast of Norway the other day accidentally hooked an enormous, prehistoric fish. Then he ate it, because it is a natural human impulse not to do taxidermy but to find out what something tastes like. 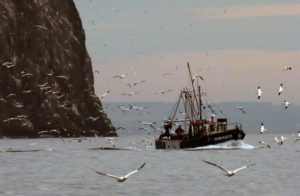 To be fair, the fish, scientifically known as Chimaeras Monstrosa Linnaeus and more familiarly as a ratfish or a rabbit fish, didn’t survive the journey up to the surface; the pressure change over 800 meters (2,600 feet) was too much for its poor fishy body. The fisherman, Oscar Lundahl, told the Sun that it took half an hour to reel in the fish, which was on the same line as a pair of blue halibut, which he was actually trying to catch.

To read the entire article, please click on https://thetakeout.com/teen-catches-enormous-prehistoric-fish-says-it-tastes-1838148221